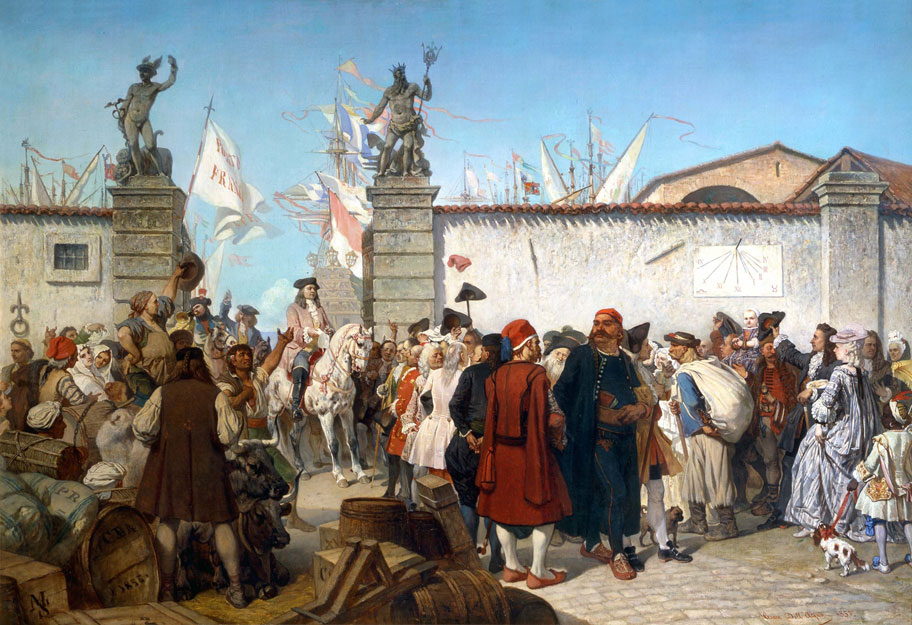 On 18th March 1719, Emperor Charles VI established the Free Port of Trieste, a “licence” that changed not only the course of the city’s history but also that of the Hapsburg Empire first and later of the European markets. In these past three centuries, the Julian port has played a central role in trade relations between the Old Continent and the East: we need only consider, for example, the expansion of trade brought about by the opening of the Suez Canal.
Such a long and dense stretch of history deserves to be investigated and recounted.
This anniversary can and should be taken as an opportunity to reflect on the peculiarities and the identity of the port and of the city itself, of which the port is a part and for which it has always constituted the major economic driver.

The foundation of the free port of Trieste in the 18th century resulted from the decision of Charles VI and Maria Theresa to designate Trieste as “the” port of the Empire, a port that was to attract to the city the most diverse and qualified economic enterprises. Among them, we can recall some of the major insurance companies in the history of Italy and Europe, and the leading shipbuilding company in the cruise ship industry worldwide.
Equally important, we should recall that the presence of the port spurred the development of specific activities like coffee imports/exports and industrial coffee processing.
Everything in Trieste talks about the sea and the port.

Rereading its history and starting from the material and non-material assets we have inherited, the port of Trieste is experiencing an extraordinary revival, taking on a central role both nationally (first Italian port for railway traffic and transport) and internationally (reference node in Europe for the New Silk Road). Hence its renewed legal status of Free Port. Hence the upgrading of the infrastructural network largely planned and realised during the Hapsburg Empire: a point of strength that is absolutely unique to Trieste are its multiple rail tracks that are widely present on every quay and within the intermodal terminal area. A railway infrastructure that has direct daily connections with all the major European destinations.
An international port, a gateway connecting Europe and the Far East.
The modernity of the economic-political design conceived three centuries ago means that, more than an abstract tribute to yesterday’s port and the past, this is a reflection that also applies to the port of today and tomorrow and to the strategies being implemented for its further development.